Edited by Frank Marafiote for the Internet. With Hillary Clinton likely to pursue the Democratic nomination for president inquestions about her intellectual and moral education abound. 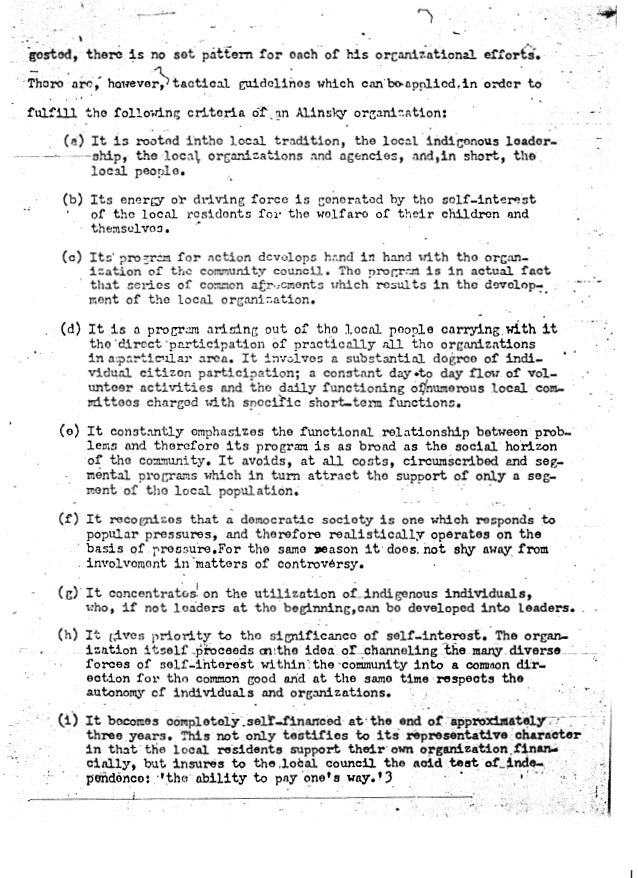 You just have to get yourself up to Wellesley and do it in person. They get a lot of calls about it, the nice people at Wellesley told me, but when the callers are informed that they have to come read it in person, few follow through.

I assume that most of the callers are Hillary haters, on the prowl for evidence of her plot to destroy America Spoiler alert: It was fascinating just to see it, in a way.

Christopher Hennessy of media relations walked me up to the archives room and introduced me to Mary Yearl, who was behind the desk; she pointed to a slim, hard- bound manuscript cradled on two foam wedges atop a conference table.

The thesis, in the right-wing fever swamps, was the Red Rosetta Stone.

This is the conspiracy theory Ben Carson revived, with quite a twist, at the Republican Convention, when he veered off script to tie Clinton, through Alinsky, to Lucifer. So what is it actually? An Analysis of the Alinsky Model.

Basically, Clinton seems to have been interested in two questions, one concrete and one abstract. The concrete one was: Can poor people be organized into a powerful political force? The abstract one, which was in the water on college campuses in those days, could be put something like: Her musings on the abstract question go back and forth between endorsing a more confrontational posture here and one more rooted in consensus there.

Put more simply, that conflict can serve a social function. She cites the sociologist Lewis Coser a lot, who strikes me as a very Hillary sort of person to cite—he was of the left but also a critic of the left.

The longest chapter looks at three case studies of Alinsky organizing projects and why they succeeded in the first case and failed in the other two.

The Kodak Corporation at first was actually cooperative, even promising to build a plant there, which it never did, at least as of May This might seem surprising at first blush, but if you understand Alinskyism, it makes perfect sense, because Alinsky was all about local control.

He was very suspicious of the feds butting in, and Clinton imbibed some of that from him. This section of the paper also includes a short critique of Daniel Patrick Moynihan—interesting in light of the fact that three decades later, Moynihan would welcome her to New York and she would win his Senate seat.

Clinton thought that Moynihan, a Harvard scholar and Nixon adviser then, was naive about the willingness of Congress to fund initiatives for the poor.

But she does conclude her discussion of the War on Poverty by quoting old Pat approvingly: We learn some things about what she thought then. She found much to admire in Alinsky, who sat down for two interviews with her and showed her around his Chicago.

If the ideals Alinsky espouses were actualized, the result would be social revolution.Now, one of the things that I have learned about Hillary Clinton is that one of her heroes, her mentors was Saul Alinsky.

And her senior thesis was about Saul Alinsky. At the time, Clinton was Hillary Rodham and the student government president at Wellesley College. The New York Times reviewed the page thesis and summarized her views this way. Watch video · Now, one of the things that I have learned about Hillary Clinton is that one of her heroes, her mentors was Saul Alinsky.

Hillary Rodham Clinton's political science professor says he received a call from the White House in that resulted in Wellesley College .

Clinton met with Alinsky several times in while writing a Wellesley college thesis about his theory of community organizing. Clinton’s relationship with Alinsky, and her support for his philosophy, continued for several years after she entered Yale law school in , two letters obtained by the Washington Free Beacon show.

Hillary Rodham in , when she was president of Wellesley College's Young Republicans, shown here with the cover page of her senior thesis from on radical organizer Saul D. Alinsky.